On the Road Again:
Planes, Cabs and Pedicabs
THURSDAY, JULY 25, 2019 -- Grounded for a year by an ailing hip misdiagnosed as a back problem, I recently hit the road again with a transcon from San Francisco to New York and shorter flights to and from Madison, Wisconsin.

All in all, not unlike a bear coming out of hibernation.

I booked a flight from SFO to New York/Kennedy on Alaska Airlines, snagged its version of a premium economy seat and a civilized 9 a.m. departure. It was a route that Alaska Air picked up when it acquired Virgin America and a departure time favored by Bay Area travelers who prefer not to wake in the wee hours to catch a first-flight-out morning transcon.

At 1 a.m. on departure day, however, Alaska Air texted that the 9 a.m. flight was delayed four hours. A phone call to a reservationist shed scant light on the delay and an initial reluctance to rebook me on another carrier. When I pushed back, however, she found one seat: a coach aisle seat on American Airlines' 6 a.m. departure. Knowing that SFO's early-morning bank of flights can be a zoo, I was in an Uber by 3:30 a.m., arriving at American 30 minutes and $35 later.

There was just one American agent working the bag drop counter with 25 people lined up, many grumbling loudly about the lack of assistance. When I asked a ticket agent if someone could open another bag drop station, she semi-growled that they were "short staffed."

"Bet you miss Bob Crandall's American," I said, referring to the airline's 1990s glory days under its former chairman and chief executive.

She broke into a big smile. "You have no idea how much I miss Mr. C," she said. "We all miss Mr. C. He was tough, but he cared. You could ask him a question at a [employee] town hall meeting and you'd get an answer. Now I don't ask questions.

American's specially configured transcontinental A321s have four classes: private pods in first class; lie-flat beds in business; a Main Cabin Extra section with five additional inches of legroom; and, of course, coach, where the seating is so tight that it's practically impossible to open a dropdown table and use a laptop.

American's in-flight service was surprisingly good. Even coach flyers had a choice of three boxed cold breakfasts; the business and first class menus seemed excellent. American has eliminated seatback monitors on other aircraft, but the so-called A321T planes are fully equipped. Two fairly new films and we were landing at JFK. As anyone who has used American's Terminal 8 at JFK knows, the walks after arrival are long, long, long. The good news? My bag was waiting at the luggage carousel when I arrived.

Originally, I planned to cab it into Manhattan, but with Thursday afternoon traffic into the city, the tourists and the heat, I opted for an alternative: a black car service called GroundLink. I was picked up in a roomy, air-conditioned Toyota Highlander. Even better? JoeSentMe members who book via the GroundLink app--in advance or on demand--get a 20 percent discount. Painless and truly comfortable.

Although snagging a cab in midtown Manhattan is easier these days thanks to the ubiquitous presence of Uber and Lyft, flagging down a yellow ride on a summer Friday afternoon was a near impossibility. Besides, I was headed to a function in Central Park and cars are verboten. So I did a cheesy, touristy thing: I hailed a pedicab. 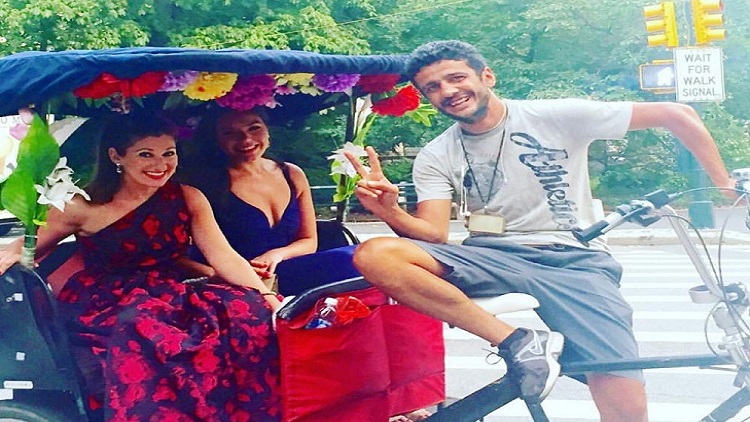 My response: "$40 direct to Bethesda Fountain," my Central Park destination.

"Forty-five," he shot back. I agreed.

The next 20 minutes was a death-defying dash in a three-wheeled bike, in and out of Midtown rush-hour traffic. I hung on while he cut off cabs, slithered in front of trucks, and outmaneuvered buses and other motorized vehicles. But I got to the park in one piece and was deposited in front of the Fountain. No motor-powered conveyance could accomplish that.

My flight to Madison several days later was via LaGuardia Airport. It may no longer be the third-world airport that then Vice President Joe Biden dubbed it in 2014, but it's still immersed in construction. The chaos and traffic are horrendous. Give yourself plenty of time to get there and get around.

When I got back to SFO several days later, the airport had created a new pick-up zone for Uber and Lyft in the airport parking lot. I dodged the long wait and early-adapter confusion and took a $60 cab ride home. It cost a few bucks more, but was less of a hassle.

Sometimes the old-fashioned ways are the best, especially for bears coming out of hibernation.