Los Angeles Celebrates 100 Years of Barney's Beanery
THURSDAY, FEBRUARY 27, 2020 -- Barney's Beanery sounds like a dive and looked like a shady roadhouse for decades. But it has the soul of a great saloon and gathering place and maybe that's why it is one of the few drinking and eating emporiums in Los Angeles that can legitimately claim it is 100 years old.

Known as Barney's or just "the Beanery," it's been a fixture on Santa Monica Boulevard, a couple long blocks south of the Sunset Strip. In the late 1960s, I had an office about ten steps from its front door. It was the end-of-the-day decompression chamber for me and my coworkers. We could walk over and didn't have to move a car and jockey for a parking space.

Yet it wasn't until I met A.J. Sacher, operations director for the last 12 years, that I learned a well-kept secret: The Beanery spent the first seven years of its long, long life in Berkeley, California. The founder, a former Navy cook named John Anthony, called himself Barney and his signature dish was meaty chili with, I am told, no beans. Anthony, who opened the place in 1920, pulled up stakes in 1927, moved it to LA and repotted it in the white wooden shack that is its current location. 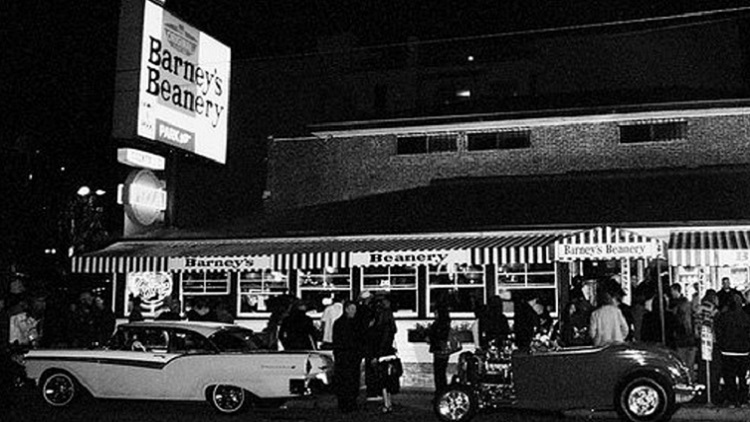 The funky Barney's Beanery took root in Southern California. Years later it would be just below Los Angeles' tony nightclubs on Sunset--Mocambo, the Interlude, Ciro's and a half-dozen others that were packed with celebs, stars, pols, journos, gangsters and other assorted hedonists.

"Barney's was casual, warm and welcoming and, as the movie industry grew, it became the hangout for the behind-the-camera crews, grips, extras," Sacher explains.

Rocker Jim Morrison was tossed out for relieving himself on the bar. Janis Joplin had her final meal at The Beanery three hours before she died. Quentin Tarantino penned scenes for his landmark film Pulp Fiction at Barney's. Oliver Stone shot scenes of The Doors biopic here. Episodes of Columbo, Peter Falk's detective series, were set in Barney's, too, but only one actually was filmed there.

Me? I remember seeing the then-little-known Burt Reynolds there. But I went to Barney's to drink and unwind, not gawk. But it was never a shot-and-a-beer Boilermaker crowd. There was an unmistakable showbiz and artistic vibe among the clientele. As decades rolled by, the Beanery remained a hideout in plain sight for beatniks, hippies and avant garde artists. (The photo above is how the place looked in the 1960s.)

Anthony eventually sold Barney's to a beer distributor and he sold it to two food guys who also own an upscale pool hall. Today, the Beanery looks pretty spiffy inside and out. It's still white outside, but now has green awnings and its own parking lot. The old wall between the bar and restaurant has been torn down and there's an outdoor patio.

Still, the menu has clung to its comfort cuisine and pub-grub theme. If your stomach and waistline can stand them, Barney's continues to make banana splits, waffle sundaes, warm apple pie, ice cream milk shakes and malts. A 4-to-7pm "happy hour" offers discounted appetizers, 44 beers for as little as $5.50 a pint and $6 well drinks.

Even outside the happy-hours times, prices are extremely reasonable for food and drink, especially given the Beanery's fame. The husky $10 Barney Burger--two patties and fixings--is served with a side. There are now a half-dozen styles of chili and all but the original have beans. The price? Around $8.50.

While the Beanery could be a West Coast annex to the Rock and Roll Hall of Fame, there is, mercifully, no live music or DJs. Just a jukebox and a full music library. For wannabee perfomers who crave center stage, Karaoke Wednesdays and Sundays are popular.

On the other hand, Barney's has morphed into something of a sports bar and has 50, count 'em, 50 televisions around the room. On big game nights, the decibel level can go through the roof, says one regular. If you're going to Barney's for conversation or hard-core contract negotiation, make certain there are no televised championships at stake.

Meanwhile, the original Barney's Beanery on Santa Monica Boulevard no longer stands alone. There are now five branches scattered around the Los Angeles area. John Anthony would surely be happy that his legacy lives on.