On Monday morning I'm scrambling at the supermarket to stock up on everything paper and canned plus my favorite Rye whiskey. In the afternoon I'm squinting at cable news, watching the Dow Jones dive 3,000 points. A few hours later, a new phrase disrupts my life in San Francisco: Shelter in Place.

What the hell does that mean? Simply this: San Francisco leaders have laid down near martial law. We can only leave our homes for "essential reasons" like going to the market, a drugstore or the bank.

An hour after the shelter-in-place order, I get an E-mail from my gym: We're closing until further notice. That's essential to me since I'm trying desperately to peel off pounds. A few minutes later, my mobile phone rings and an editor friend says "meet us at Harry's for last call." Like many others, San Francisco mandated the closing of all bars, clubs, sit-down areas of restaurants or any place where people are packed in less than six feet apart.

I hotfooted it three blocks away to Fillmore Street, said to have among the steepest rents of any retail area in America. At 4:45pm on Monday, though, it was a ghost street. Every pricey retailer paying pricey rents along a four-block stretch was closed. Ralph Lauren had a six-foot metal gate stretched across the entrance.

Inside Harry's, a popular sports bar that's usually chockablock on Mondays, there were only a dozen folks on the stools and in the booths. The televisions, usually blaring basketball or golf, were switched to news shows.

It was a pub with a pall. It was happy hour--but nobody was happy.

We were all confused as news of what was happening trickled out. San Francisco is a Democratic stronghold, of course, so most folks were carping that President Trump should have realized the severity of the virus threat earlier and acted appropriately. The most morose? Harry's cooks, servers and bartenders. Normally in San Francisco, they could get a job anywhere. With the shelter-in-place shutdown, however, they are facing weeks--maybe months--of unemployment and no paycheck.

My life, like everyone else's, has changed in an instant. I got an E-mail from University of California San Francisco Medical Center informing me that my next appointment will be a "Visual Visit" akin to Skype. Another doctor wanted to do a telephone session so as not to interrupt my "isolation." On Tuesday, the first full day of shelter-in-place rules, traffic on BART, the Bay Area transit system, was down 85 percent.

For an instant, not going to my office sounded like a reprieve rather than a hardship. In my smallish apartment, I have a workspace, a printer, WiFi and plenty to do. I also have a big-screen TV and Netflix. I have a well-stocked fridge and a fortified liquor cart. 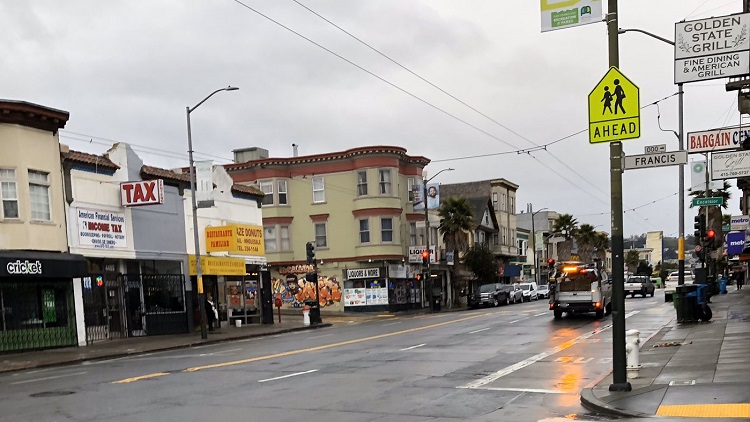 But there is no street scene and no socialization. There are no coffee bars to meet with friends and swap yarns. There will be no movie or "play" dates. While my gym is closed, I wonder if my Saturday-morning walking group is disbanded. Half the fun is walking with a different person every week and catching up on each other's life and worldview.

Being confined to my casa with the refrigerator and my trusty George Forman Grill is a temptation to binge eat when I am trying to pound out a snappy first paragraph or wind up a story. At the office, I keep only healthy snacks, but here at home temptation is everywhere. Writer types need to fight the urge to feed the beast while searching for that perfect word or wrestling with a complex computation or doing anything that requires concentration.

On the other hand, I can take breaks--if I want to--and stream a movie at midday or glue myself to CNN to track all the latest on the Coronavirus and the stock market gyrations. I decluttered my closets today, something I would not do on a regular, non-quarantined workday in my office.

Then there is the question of traveling. I was planning to fly to Los Angeles this weekend to attend a birthday party and spend a few days visiting friends. The family cancelled the birthday bash and I don't necessarily want to hit the road for essentially leisure travel. It's not because I was concerned about exposing myself to the spreading Coronavirus in Los Angeles. Rather, by the time I arrive, Angelenos could be in lockdown as well. (Luckily, I can bank my $137 SFO to LAX Southwest Airlines roundtrip ticket for a year without a hassle.)

I feel bad for the people in my life whose income--indeed, their lives and livelihood--could be paralyzed or, worse, be taken forever. I'm thinking about Lily, who has the dry cleaner on the corner and Romy, my barber. I'm thinking about Dr. Theresa Lam, the sweet optometrist who fixes my glasses free and does the same for dozens and dozens of other self-employed folks or paycheck-to-paycheck souls.

So I guess I'm hunkering down at home for the duration. Sheltering in Place, as they say.

But it's also San Francisco and we can adjust pretty quickly. I hear the famed Buena Vista bar was dishing up corned beef and cabbage and pouring its legendary Irish Coffee on St. Patrick's Day--and doing it to go.

The photo: Wednesday morning, March 18, on Mission Street at the corner of Francis Street as posted on Twitter.