JSX: Small Jets and Smaller Airports Are Big Winners
THURSDAY, SEPTEMBER 10, 2020 -- Communications strategist and remote-work evangelist Andy Abramson recently moved to a Las Vegas suburb from California and was tipped that he could fly back to Los Angeles for a meeting on a private jet for just $89 one-way.

Abramson rolled the dice and booked a flight on JSX. He thinks it was a winning bet.

"It was my first flight since March 15 and it was absolutely a rewarding experience," he says. "No lines. A ten-second walk from my Uber to the ticket counter. A clean terminal with comfortable chairs. No bag fees. Fast WiFi. Free Starbucks coffee. A polite security check. Free in-flight cocktail. And your luggage is in your hand minutes after you land."

In other words, Abramson concludes, "Why fly full-service airlines and put up with pain and suffering?"

Actually, JSX, originally branded JetSuiteX, is not really a private jet. It just looks and behaves like one. And it is full service whereas the so-called full-service airlines have cut most in-flight perks long before the Coronavirus pandemic hit.

JSX is the brainchild of Alex Wilcox, one of the founders of JetBlue, another airline with a personality and generous legroom. He's upped the ante here with his new venture. JSX's fleet of Embraer 135s and 145s, which normally can seat 37 and 50 passengers, respectively, have been reconfigured for only 30 seats. That allows for 36 inches of legroom at each seat and a commodious 2x1 layout. Each chair has a power port. Headroom is improved because overhead bins have been removed. And since JSX uses private-jet terminals at most airports it serves, travelers only need appear about 30 minutes before departure.

Sound familiar? That may be because I first wrote about JSX when it was JetSuiteX in October, 2018. Wilcox has made some interesting changes since then. Besides rebranding, Wilcox moved corporate headquarters to Dallas and split the company into two pieces. JSX is also a private-charter carrier. For $6,000 an hour, "you get a 30-seat corporate jet for half the price of a 12-seat Gulfstream, which costs $12,000 an hour," he contends.

But JSX has lost some routes, too. "We sadly suspended service to and from Monterey," California, he says. "It wasn't one of our better markets in the initial COVID-19 lockdown, but we certainly want to return." 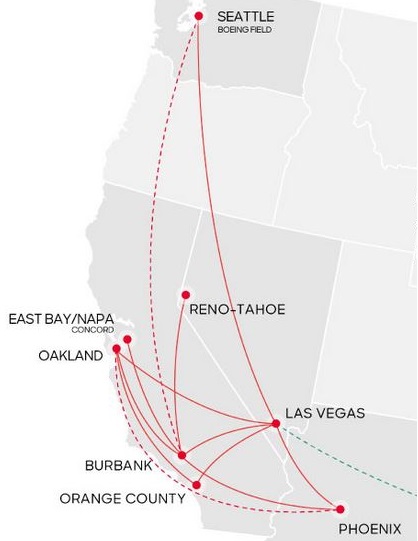 Even with time-saving perks, in-flight comfort and a cleanliness initiative called Simpli-Fly, surely Wilcox must be worried that business travelers will Zoom and teleconference more and fly less today.

"I'm not concerned," he says. "In my experience, the more people meet virtually, the greater the desire to travel and meet them in person. Long-term, what's happening now will only increase the business travelers wanting to have a meal with the person they've stared at through a screen since last March."

One thing Wilcox is not pitching is JSX as a discount carrier with frills. The $89 one-way fare that Abramson snared, for example, was an advance-purchase promotion. "Typically, you will spend $40 to $50 more one-way on a JSX ticket than on a normal airline," Wilcox says. "But if you value your time and if you value free checked luggage and a free cocktail, you quickly recoup that money and more."

Looking ahead, Wilcox is convinced the JSX model "works in over 500 U.S. markets alone" but getting there with the appropriate aircraft is a long haul. Two years ago, he was looking at a nine-seat, Israeli-made, electric-powered jet, but no action has been taken. "We continue to be interested in it and we're in discussion with a few manufacturers to possibly create a custom JSX jet."

Actually, Wilcox and his team are quietly working on their own version of an even more private jet. A few weeks ago, an unauthorized photo hit the Internet showing a 1x1 configuration for JSX's fleet. "That is an R&D airplane and we did not pull seats out," he insists. "We just spread them apart in a Embraer-145, which is nine feet longer than a 135." Individual passengers shouldn't get their hopes up of flying the roomier configuration. If Wilcox decides to put the new configuration into service, he says it will only be booked for private charters.

Meantime, what has Wilcox learned since JoeSentMe last spoke to him two years ago?

"Small is beautiful," he says. "Customers are everything. Delivering what you promise is critically important above all."