Can't Stop the Music:
Lee Abrams Is Still Flying
THURSDAY, DECEMBER 3, 2020 -- Chicago media mogul Lee Abrams was traveling four or five days a week before the Coronavirus hit. He's still on the road--albeit with some inevitable cutbacks and corrective measures.

Before the pandemic, he usually flew first class between O'Hare to New York/LaGuardia. Now? "My New York trips are busy, very crowded, probably because American Airlines has cut back on flight frequencies," he explains. That means he often must fly American in coach or Southwest Airlines. 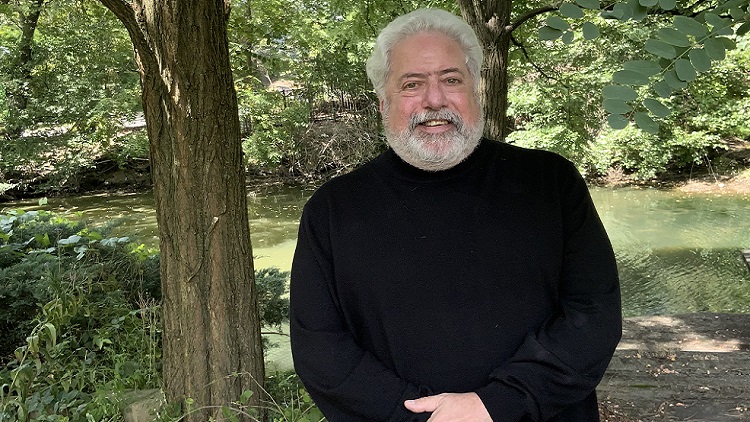 He takes more care at airports, but he's not paranoid, either. "It really doesn't concern me. Everyone wears a mask."

Why continue traveling at all in the middle of a once-in-a-century virus? "I'm doing business meetings and nothing beats face-to-face contact."

Still, he admits, his meetings are not always as effective as in the days before Covid-19. "The pandemic has interrupted doing business with people who are working out of their homes, so offices aren't staffed 100 percent," he explains. "Projects and details are often delayed."

Naturally, he's also traveling virtually more than ever before. "I'm making more Zoom calls, but I am anxious to get back on the road full-time."

What keeps the silver-bearded, 67-year-old Abrams on the road even during a health crisis that has grounded many of his business travel compatriots? He's head of Chicago-based Mediavisions, a media consultancy. Abrams describes himself as a media transformer and he's often credited for creating the album-oriented-rock format for terrestrial radio and being one of the creative forces behind satellite radio. These days, he has a dozen "reimagineering" projects on his plate for television, radio, magazine, newspaper and digital ventures. And he's frequently consulted when the media requires an expert to discuss the state of the radio business.

Abrams still flies in first class "when the client pays for it." He'll pony up from his large stash of miles when they won't. He also pilots his own single-engine, four-seat Cirrus SR-22 aircraft on shorter trips. It's based at Chicago's Midway Airport and Abrams claims he flies it for its "efficiency," usually on trips of fewer than 1,000 miles.

For years, he lived in Atlanta and still has a mountain of Delta SkyMiles. Now based in Chicago, however, he switched his allegiance to American and uses United Airlines as a back-up carrier.

"If I'm paying for the flight, I search the airline Web sites for the best fares rather than [use] a third-party site," he explains. Still, first class is an issue. "It used to be that first class was never questioned [for me], but now it is. Plus, first class is often sold out."

As any business traveler knows, coach travel "for any period of time is just too cramped. The advantage of first class is that I can work on board, write, strategize and catch up on E-mail." He carries a laptop, but most often uses an iPad tablet in flight. He finds it more convenient and comfortable to use in the confined spaces in the skies.

Like most business travelers, Abrams has his own travel style. "On short trips, I'm a window guy. On long trips, an aisle guy so I don't have to climb over people," he says. "I'm a non-talker on trips and will wear headphones to stave off someone who wants to chat me up. I'm a big fan of getting to the airport very early. I am always building in plenty of time--I don't like to be rushed--and I can always work at the airport."

He's choosy about hotels and will book Four Seasons or Ritz-Carlton properties if budgets permit. But he's also flexible depending on the economics of the trip. "I'll do Hyatt, but I'm generally a Marriott guy," he opines. "You get a nice room for the money at a Courtyard. I've had mixed results with Hiltons."

When it comes to wheels, Abrams says he'll rent in Los Angeles or South Florida "where I am doing a lot of driving. I rent Hertz for no particular reason and I always rent a car with a GPS."

If it's a one-stop business trip--say a meeting in a city--he'll Uber. "I rarely take a cab anymore and I never drive overseas. I'll ride with friends or business associates."

And like most of us, Abrams has a list of restaurants in every city where he does business. He stays faithful to them.

"I like chain steak houses like Morton's or The Palm, but I prefer independent local favorites." Among his choices: Peter Luger's in New York; Chops in Atlanta; Dan Tana's in Los Angeles; Tadich Grill in San Francisco; and Commander's Palace in New Orleans.

"Some people like cutting-edge places," Abrams knows, "but when I am entertaining, I like old-school, tried-and-true restaurants."

One thing that has changed over the years? Abrams no longer has a cocktail of choice.