Perhaps only that last bit is good. If you're thirsty with a layover between flights, O'Hare is the perfect place for an impromptu pub crawl. No designated driver needed, no cab or ride-share to hail and you can meet interesting people where nobody knows your name. You also have choice. There are at least 100 food and beverage outlets at O'Hare and many offer adult beverages.

I had to connect through O'Hare on a recent trip and had a six-hour layover between flights. To kill some time--and meet some fellow travelers--I went over to Wrigley Field to hang out at the Chicago Cubs Bar and Grill. Cubby fans are always a passionate, friendly lot. 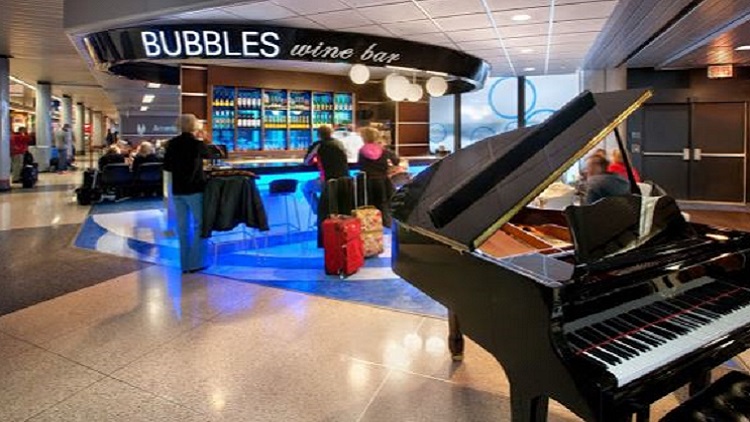 I didn't have far to go, of course. But this Wrigley Field, hard by Gate 1 in the L Concourse dominated by American Airline passengers and passersby, wasn't all that welcoming.

I ordered a Bloody Mary and the barkeep snapped, "It's a double shot, so you'll pay double. That will be $22."

"We don't sell singles, just doubles," he fired back.

"Why is that?" I asked politely.

Patrice, an educator on the bar stool to my right, also had a six-hour layover after a 28-hour flight from in Mozambique. She had a small, empty, plastic Bloody Mary glass in front of her.

"I was going to have one," chimed in Kristi, a media relations director for a Michigan liberal arts college. "But the bartender told me in advance about the double pour and the price and I said I'll take a single white wine."

I realize that airport bars have to kick back a certain percentage to "the house," but the little horseshoe-shaped Cubs Bar and Grill could give its harried bartenders a bar back and some support. For these prices, a little schmoozing couldn't hurt. But then again, they have captive, transient customers who, unless they are regular commuters, won't be coming back.

My next stop was Chili's because what's an airport without a Chili's? O'Hare has four. I stopped by the chain's Margarita Bar in the American terminal. Once again, a solo bartender was working a horseshoe-shaped plank and also whipping up drinks for the servers waiting tables. But this gent had plenty of personality and courtesy. He apologized twice when he couldn't take my order and didn't snub me when it turned out to be a Diet Coke.

I braced for the Cubs bar double-pour switcheroo, but Joe, the mixologist, just gave me a laugh. His Margarita, with house tequila, is only $13 plus, plus. But Chili's gets you on its wine prices. A 6-ounce pour of Chalk Hill Chardonnay is $16.50 while a 9-ounce pour is $23.50--or $28 and change with tax and tip. With its markup on wine, Chili's is making a bundle on your taste for the grape.

Chicago is a big beer town but, oddly enough, I didn't see a wide assortment of craft brews either on tap or in cans and bottles. Evan, a physical therapy major from Bradley University in Peoria, was quaffing a 20-ounce Blue Moon on draught. It cost $12.35 plus tax and tip, a fair price he reckoned considering the wine prices. Frankly, I would have opted for a Margarita, but I had more pubs to crawl.

A real O'Hare discovery was Goose Island Beer Company, which has three outlets around the airport. Anna, a raven-tressed lovely from Poland wearing a rose in her hair, threw out the welcome mat the moment I sat down at her stainless steel bar. She also had a couple of other bartenders and a back bar to help her out. The Goose has a warm, if industrial, vibe: old brick lines the walls and the ceiling was ribboned with air conditioning ducts, piping and vents.

I asked Anna for a drink suggestion. Instead of trying to trade me up to a pricey potable, she offered a 12-ounce bottle of Sam Adams for a reasonable $9. It was ice cold, perfectly poured and refreshing at noon.

Like most O'Hare pubs, Goose Island has two monitors. One, I assume, is for the Cubs. The other is probably for White Sox games. Soccer matches invariably fill the gaps. Also like most O'Hare bars, food is served along with the liquid nourishment.

One exception: Bubbles Wine Bar in Terminal Three near Gate H4 (above). It's like going to a jazz club with no cover charge and great piano music. However, there is no piano player. Powered by a CD, the piano's fingerless keyboard taps out a delightful array of old favorites, including "Alfie," "Greensleeves" and "Danny Boy" to name just a few.

What it's all about at this small bar is free WiFi and a few tables. It's an island of serenity, soft sounds and good wine amid the chaos of one of America's busiest airports.

Wine prices are reasonable to steep. I had a 6-ounce pour of an Italian Sauvignon Blanc for $12.50. My barstool mate, Carrie Dann from Oklahoma City, was nursing a flute of Piper Heidsieck Champagne and admitted she missed the live piano player. "It's like a robot playing its favorite songs," she said.

But Bubbles is not all play and no work. To my left, a couple had their laptops propped up on the bar and fired up on what looked like dueling spreadsheets.

Said she: "I'll have another Veuve Clicquot Yellow."