In Santa Barbara, a Throwback Bar and Grill That Delivers
THURSDAY, SEPTEMBER 30, 2021 -- In a hype-filled world, it's not unusual to find a place that promises "great food, friendly service, a homey atmosphere and the stiffest drinks in town."

What is unusual is a place that delivers on the hype--and delivers it all at fair prices.

Joe's Café in bucolic Santa Barbara, around 90 miles north of Los Angeles, does it--but still sells itself short. This is no roadside dive. It's a throwback bar and grill bucking today's culinary trend toward $70 steaks and $25 cocktails.

Opened during Prohibition, Joe's Café is a longtime landmark for locals. But given Santa Barbara's new-found popularity among bold-faced Hollywood names, I wondered if Joe's was going upmarket. So on a recent jaunt to Santa Barbara--I booked a surprisingly reasonable $117 roundtrip United Express flight between San Francisco and the five-gate, Spanish-style SBA--I decided to check it out.

Joe's has quite a history. The original location a few blocks away had been a laundry, a blacksmith shop, restaurants, a second-hand store, a soft-drink stand and a pool hall. It was operating as the Channel Bar when Joe Ferrario, an Italian immigrant, bought it in 1928 and renamed it Joe's Café. 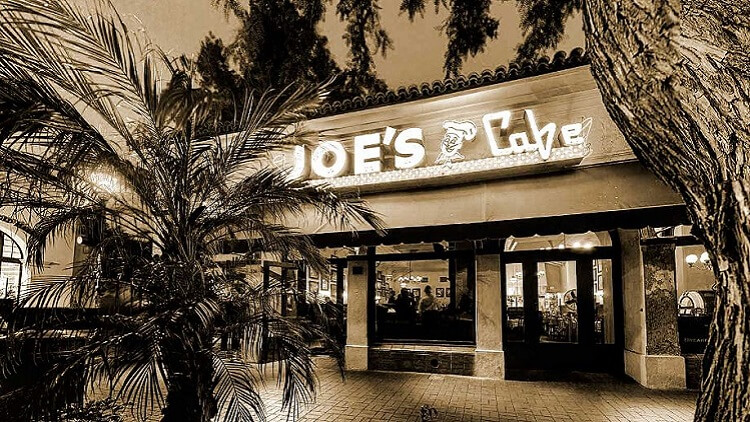 When Prohibition ended in 1933, Joe started "importing" Acme draft beer from up in San Francisco and the Café became a bar. Joe retired in 1948 and sold it to another Joe. When he retired, he sold it to a guy named Harry, who had the good sense not to rename it yet another Harry's Bar. Harry Davis sold Joe's in 1969 to Nancy Peery and she moved it to its present location at 536 State Street. Restaurateur Gene Montesano bought it in 2003 and has been at the helm ever since.

Another Joe--Joey Somerville, the general manager--had a few things to say about Joe's circa 2021. "This is not a saloon," he insists, although it checks all the boxes for a great bar: vintage photos, pressed tin ceiling, sprawling brass and glass chandeliers, beat-up plank for a bar and the claim of strongest drinks in town.

Great bars serve food and here is where Joe's shines. The French Dip (tri-tip beef or turkey) with fries and salad at $18.25 is the bedrock of the business. I paired one with a generously sized Manhattan ($12 for a well pour or $13 using Maker's Mark). Joe's Café is well-stocked with all the top brands, but its well is not exactly pedigree. My advice: Pay the extra buck on most of the classic cocktails and upgrade to the top-shelf liquors. Some well drinks start at $9.50 each.

Joe's keeps a lid on beer and wine prices, but its selections are, frankly, scant. Still, it carries popular brands of suds (Mexico's Pacifico and Corona are each $6, as is a 15-ounce can of Guinness.) Several draughts are on tap, including Stella Artois and a brew called Joe's Bad Ass Blonde, for $5.75. Wine prices start at $5.75 a glass but, again, choices are limited.

What Joe's Café has, besides the heavy pours and huge menus for breakfast, lunch and dinner, are very professional bartenders and servers. Many have long tenures on the job. As someone who appreciates professional bartenders in a day when too many stylize themselves as "mixologists," I can practically guarantee you'll get swift and savvy service here. I was on a barstool for four hours--Honest, it was research!--observing their prowess and procedures.

Alfredo worked the day shift early in the week and he showed me such niceties as a blue cheese-stuffed olive in a Joe's Martini. He's attentive, has a fine sense of humor and always makes eye contact. Sharing the shift with Alfredo is 70-year-old Frankie Calvillo, who's been serving customers at Joe's for 50 years! Frankie started as a dishwasher and worked his way up the ladder. But in his current role, he has a gift for making first-timers feel like regulars.

"Why I enjoy this job is that I get to meet so many people and they are such a pleasure," he says without hesitation.

Boyish-looking and fit, Calvillo claims his biggest thrill is "serving three generations" of Joe's Café customers. "I served them when they were University of California Santa Barbara students 35 years ago. Now their kids and grandkids come in."

Bucking modern marketing convention, Joe's Café has no signature cocktail and neither Frankie nor Alfredo lay claim to inventing any particular libation. Says Calvillo: "I say, 'What do you like? Bourbon, vodka, gin?' and I will make something and surprise you."

Despite his years behind the plank, Frankie is discreet when asked to recall any momentous event on his bar stools. But he remembers a couple who came in decades ago on their first date for a drink.

"He gave her a flower and she accidentally left it on the bar when they left. I saved it and the next time in, I gave it to them." He says the couple wasn't particularly overwhelmed by the gesture. " 'Thank you,' " Frankie recalls the gentlemen saying, " 'but we got engaged that night and she was more focused on the ring.' "

"Guess what?" Frankie asks with a smile. "They got married and are still coming in."