In Philadelphia, the Loews Hotel Fills a Tall Order
THURSDAY, MAY 19, 2022 -- Every business traveler needs a guardian angel on the road. I found one recently in Philadelphia. She magically appeared when I was at my wits end and had a charming, calming personality.

Gisela Quispe works at the front desk at the Loews Philadelphia Hotel on Market Street in the heart of town. The twenty-something Peruvian has the maturity of a hotel staffer twice her age. And kindness to boot.

I needed an 18-page document printed in the early evening, but the hotel's FedEx-managed business center displayed a "closed" sign at 5pm on a busy Friday night even though the property was hosting two large events. What I didn't see was a smaller sign directing guests to a 24-hour, self-serve room with two PCs and a printer.

Gisela could have sent me back to that room and let me fend for myself. But I was flustered and my deadline was ticking off minute by minute. Instead, Gisela soothed my ruffled feathers with a single sentence: "E-mail it to me and I will print it out for you. Don't worry."

Fine, but my laptop was acting up. Two efforts to send the file were rebuffed. I was getting flummoxed. Gisela, however, kept her cool. Third time was the perennial charm. When I sent the E-mail to the front desk and called down to see if it arrived, Gisela already had it printed out, collated and stapled.

"Nothing at all," Gisela said. "It's our pleasure." 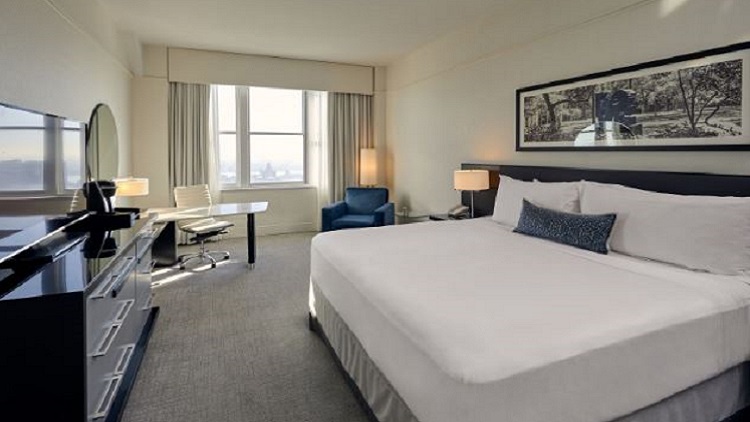 The 491-foot-tall Loews is housed in what was once the region's tallest skyscraper when it was headquarters of the Philadelphia Savings Fund Society. It has 581 surprisingly large and well-appointed rooms that were apparently once offices. Guestrooms include a very large desk and a rolling chair; a 39-inch video monitor that swivels so you can work and watch at the same time; a firm king-sized bed; and plenty of drawers and closet space. The Loews Philadelphia often has a fabulous sub-$200 nightly rate, too. Hefty city and state taxes are extra, of course.

One negative: the Keurig coffeemaker is hidden in a chest of drawers and I had to call the front desk to find it. A small sign near the television would save time for the guest and hassle for hotel employees. A positive: A couple other times I called the front desk for information on how the room worked and they promptly sent a staffer up to solve my problem.

Thanks to its bank-headquarters past--the vault is still there--the hotel has a massive, high-ceilinged lobby with four floor-to-ceiling-sized televisions. They're tuned to business and sports stations, but, thankfully, they don't drown out civil conversation. The Wall Street Journal is available free, but there's no gift shop or newsstand where you can buy the still-feisty Philadelphia Inquirer or any other paper. The Inquirer, I was told, was available within walking distance. Sorry, but even in these changing media times, the local paper should be available under the roof of any good hotel.

It may be a holdover from the worst moments of the pandemic, but the hotel restaurant wasn't serving breakfast when I was there. That's a concern for business travelers who want to hold an early meeting downstairs. (You can buy coffee, pastry and breakfast sandwiches at a grab-and-go shop in the lobby.)

The Loews Philadelphia bills itself as a "family hotel"--the New York-based Tisch family owns and operates it--and you do feel the friendliness. Every staffer I encountered at the hotel was pleasant, attentive and helpful.

That was especially true in the bar, Bourbon and Bank, which has been on the corner of Market and 12th Streets long before Loews moved in. The saloon has six stools in the hotel lobby that were always occupied by imbibers. There's also a large separate bar and restaurant behind a lobby door, but the landmark establishment does not have its own street entrance. Outsiders have to walk through the lobby for service.

I was impressed with the professionalism of the staff at Bourbon and Bank. Too often marquee hotels have barkeeps that are pulling a shift, going through the motions because thirsty guests will stop in for a drink regardless. Beverage prices are lower than at big city hotels today. Cocktails start at around $11. There is an exhibition kitchen in the restaurant, but you can also eat at the bar.

Finally, Loews Philadelphia has a well-equipped fitness center on the fifth floor. It's open from 5am to 10pm daily. It was never too busy, so I didn't have to wait in line to use the weights or machines.